Here is a renovated 1749 Colonial in Stonington for sale. If you are a history buff you will enjoy the story! 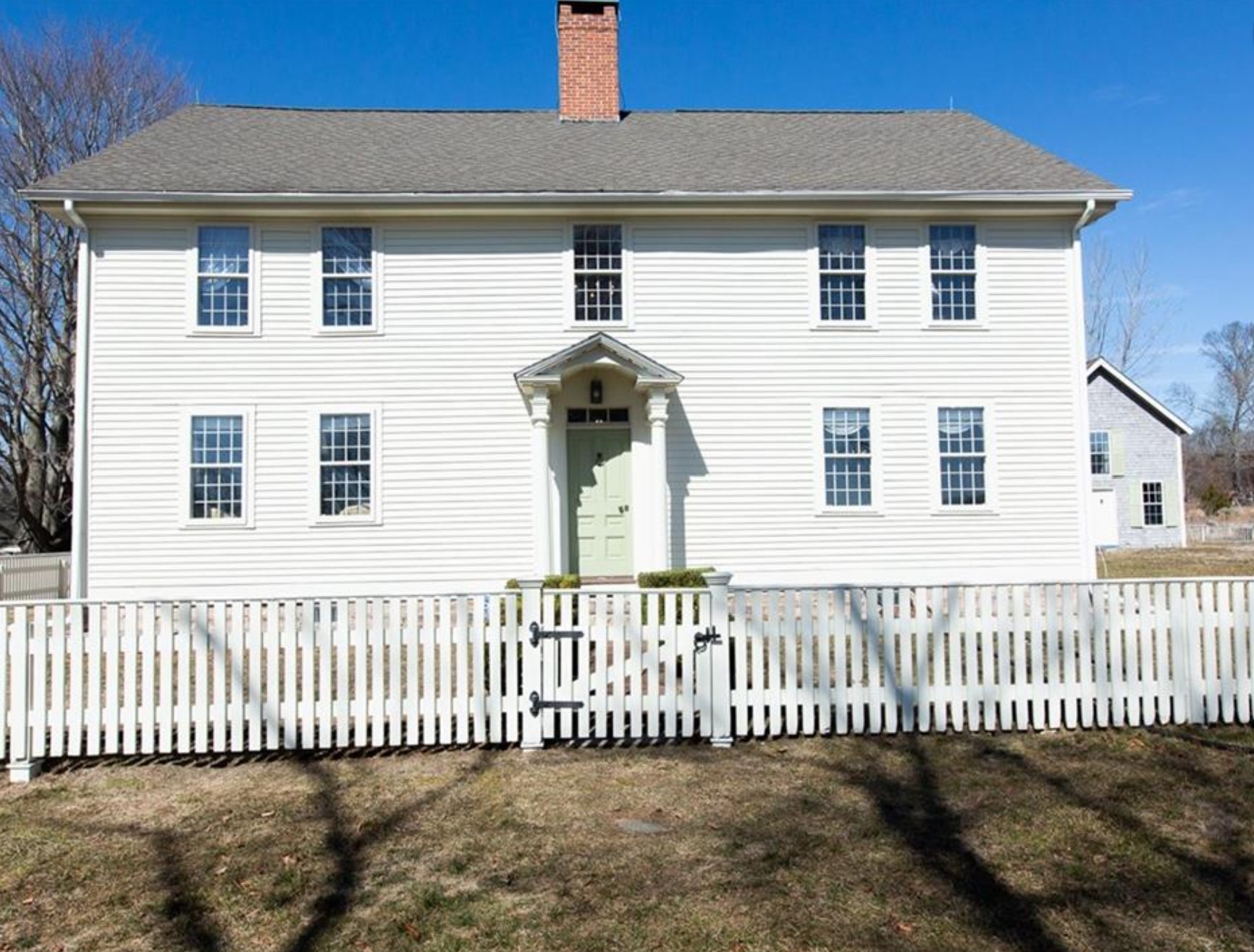 Built in 1749, the home at 704 Al Harvey Road is a true colonial. Built by Nathan Crary while King George II was on the throne in England, the land was a wedding gift from the Wheeler family when Nathan married Dorothy. Still British subjects back then, Nathan was off to serve in the French and Indian Wars. A quarter of a century later he was a Captain in the local militia against the British, known for his horse-cart trip to Windham transporting salt peter, a gunpowder ingredient, to keep it from falling into enemy hands. 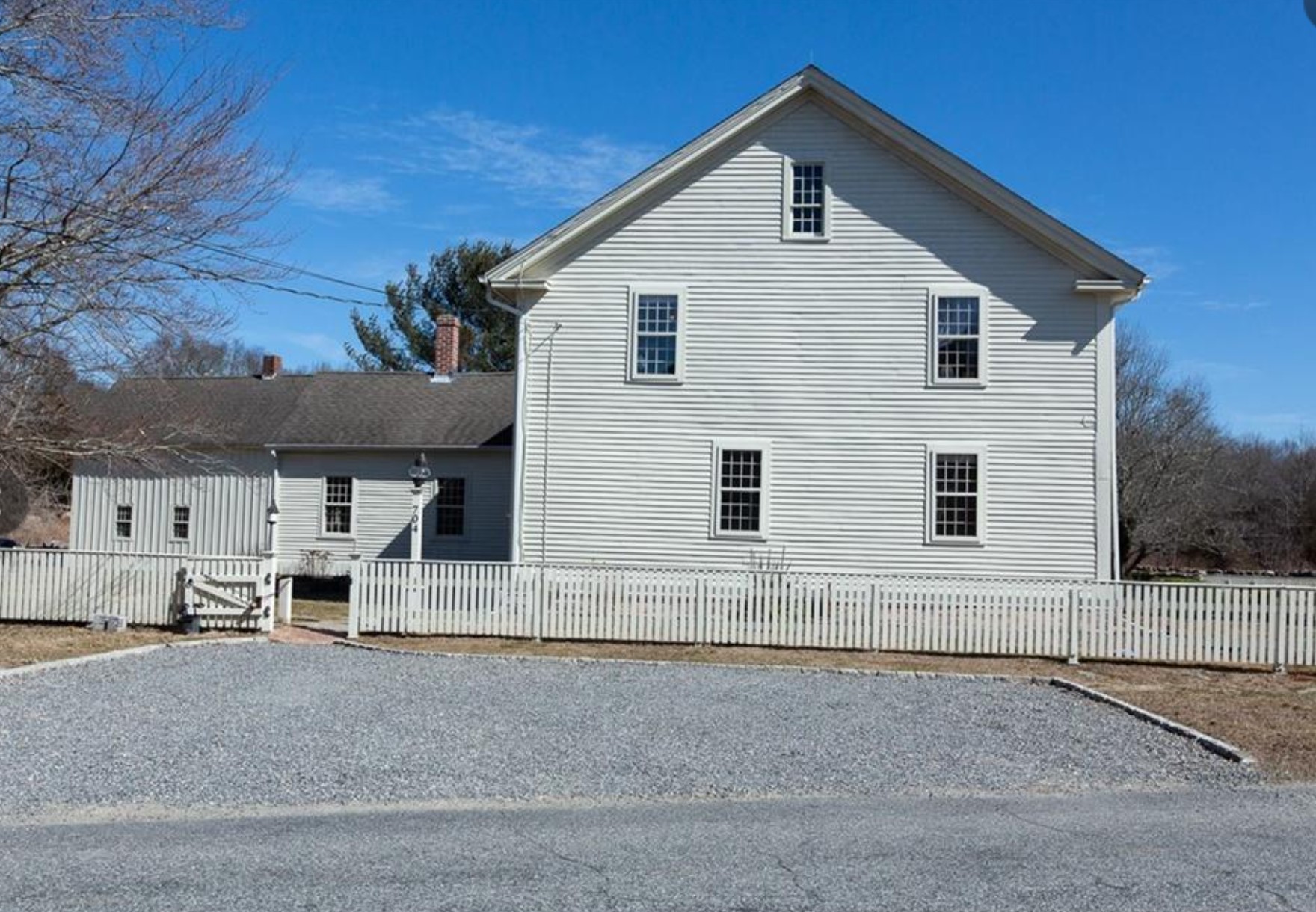 The front door of the home is below a column- supported, pediment archway with architectural features called modules. The modules, which were all hand drilled, remind one of dominos. 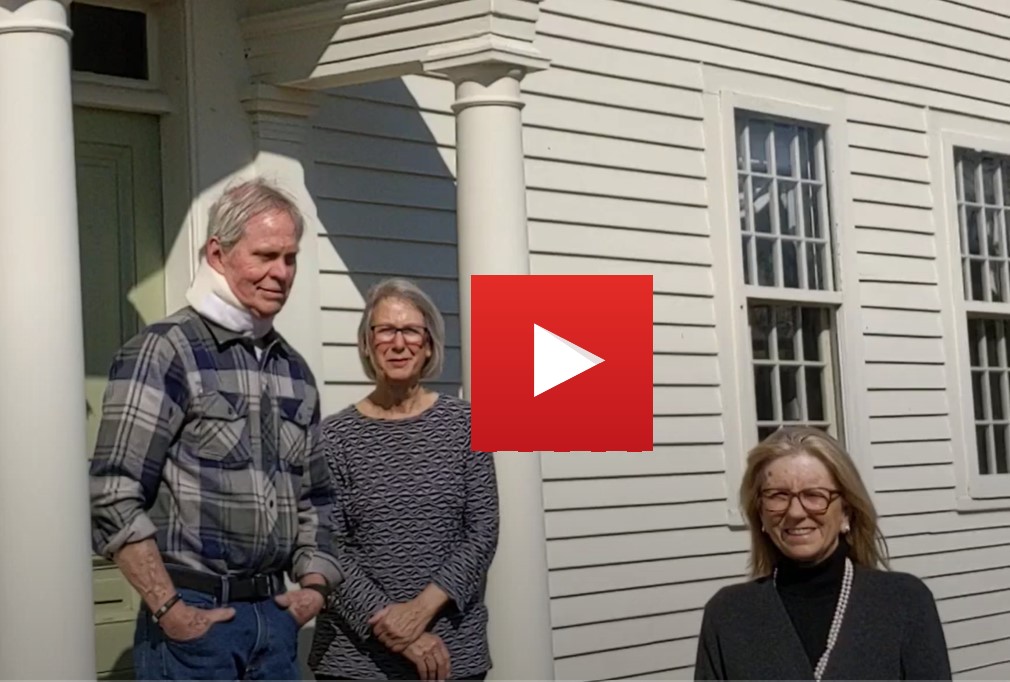 In the foyer is a stairway decorated with curling whale’s tails below each stair. The nautical touch may have been the result of the Navy experience of Nathan and Dorothy’s, son, Jesse Crary.

A privateer, Jesse Crary suffered the indignity of having his sloop, the Fox, captured by the blockading fleet. Sir Thomas Masterman Hardy, the fleet commander, had served in 1805 as flag captain under Admiral Lord Nelson at the Battle of Trafalger. However, Jesse recaptured the Fox with friends aboard the “smack” Hero, which later was used by another Stonington native, Captain Nathaniel Palmer, when he discovered Antarctica while on a seal hunting expedition. 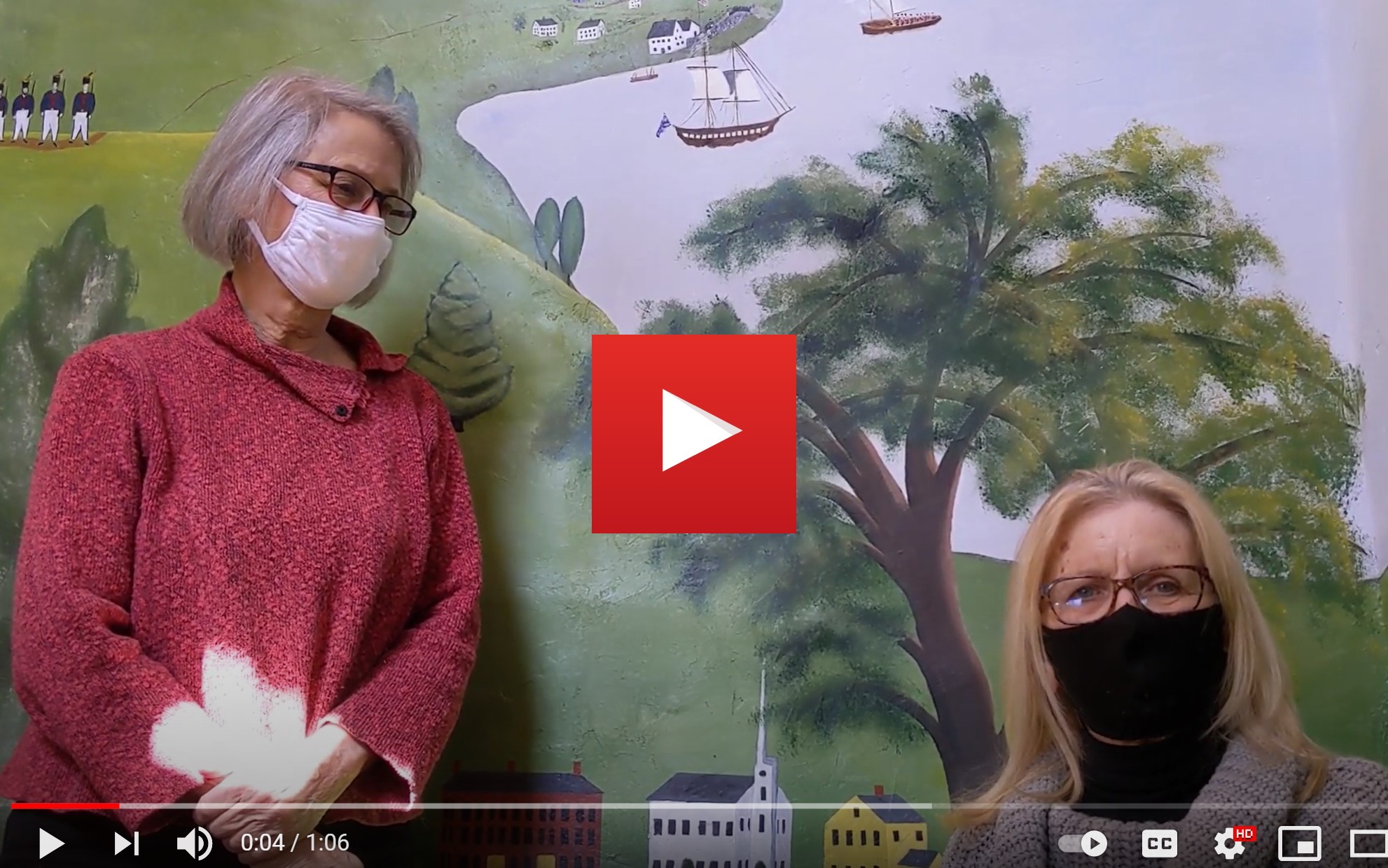 A mural on the stairway depicts the Battle of Stonington, August 8-10, 1814, near the end of the War of 1812. Painted by Margaret Gilbert and her daughter, Kate, it depicts the actions of the second owner of the home, Jesse, and is painted in the style of Rufus Porter. Porter is well recognized for his folk art, however, he was so much more than a painter. Porter was an inventor, a musician, and a founding publisher, editor, and writer for Scientific American, still in publication today.

The dining room is to the right of the entrance and the living room to the left.  Floors on the first floor are white oak boards, which had been removed for new supporting timbers, an underlay of solid pine boards instead of plywood applied for insulation and then the oak was replaced. Extra work, yes, but far structurally sound with no draft from the basement. 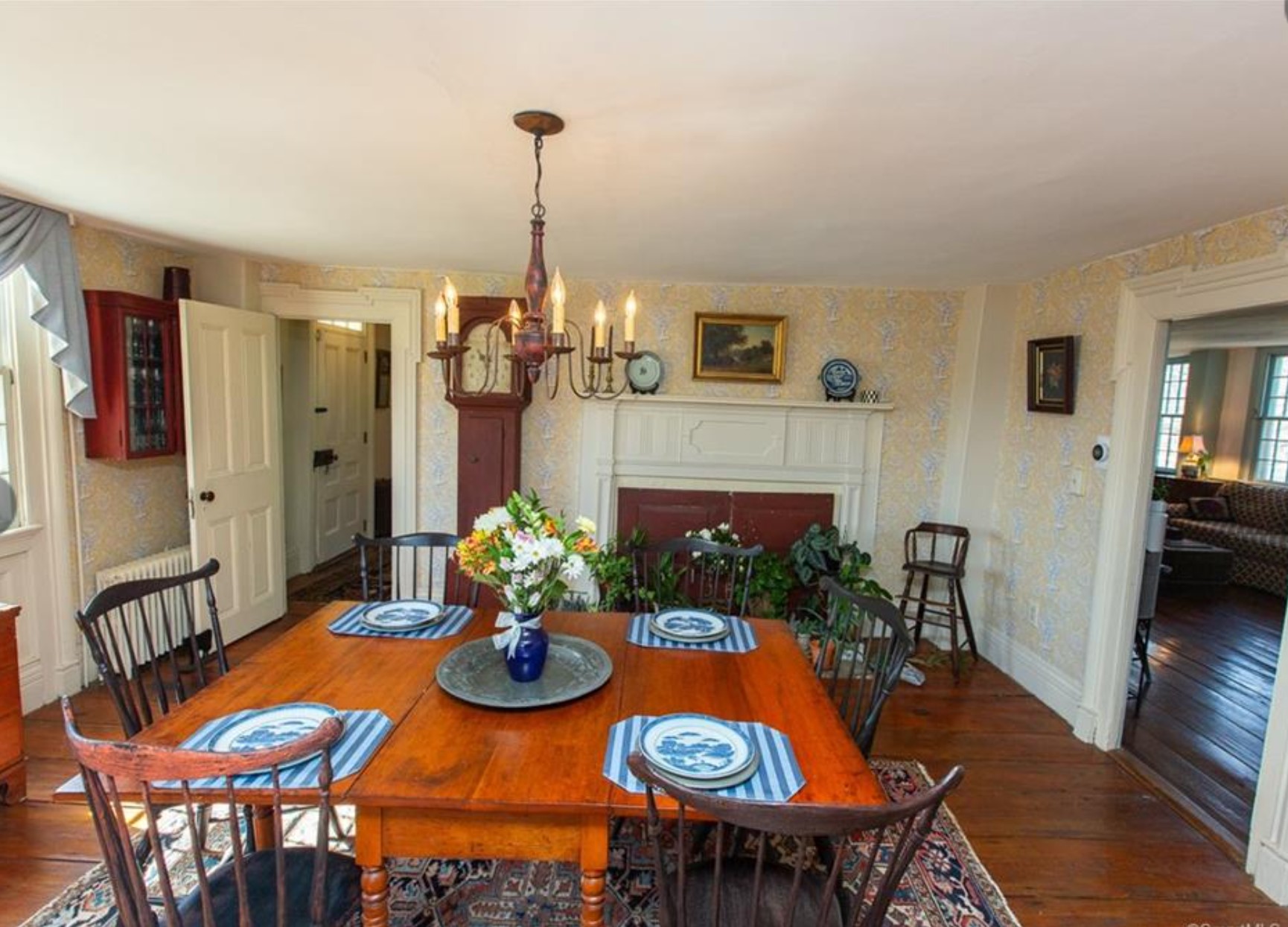 Fireplaces are adorned with hand carved and hand planed mantels.  The hand carved palladium wood panels under the windows accent what would have been floor to ceiling windows. The doorways exhibit Greek key molding. 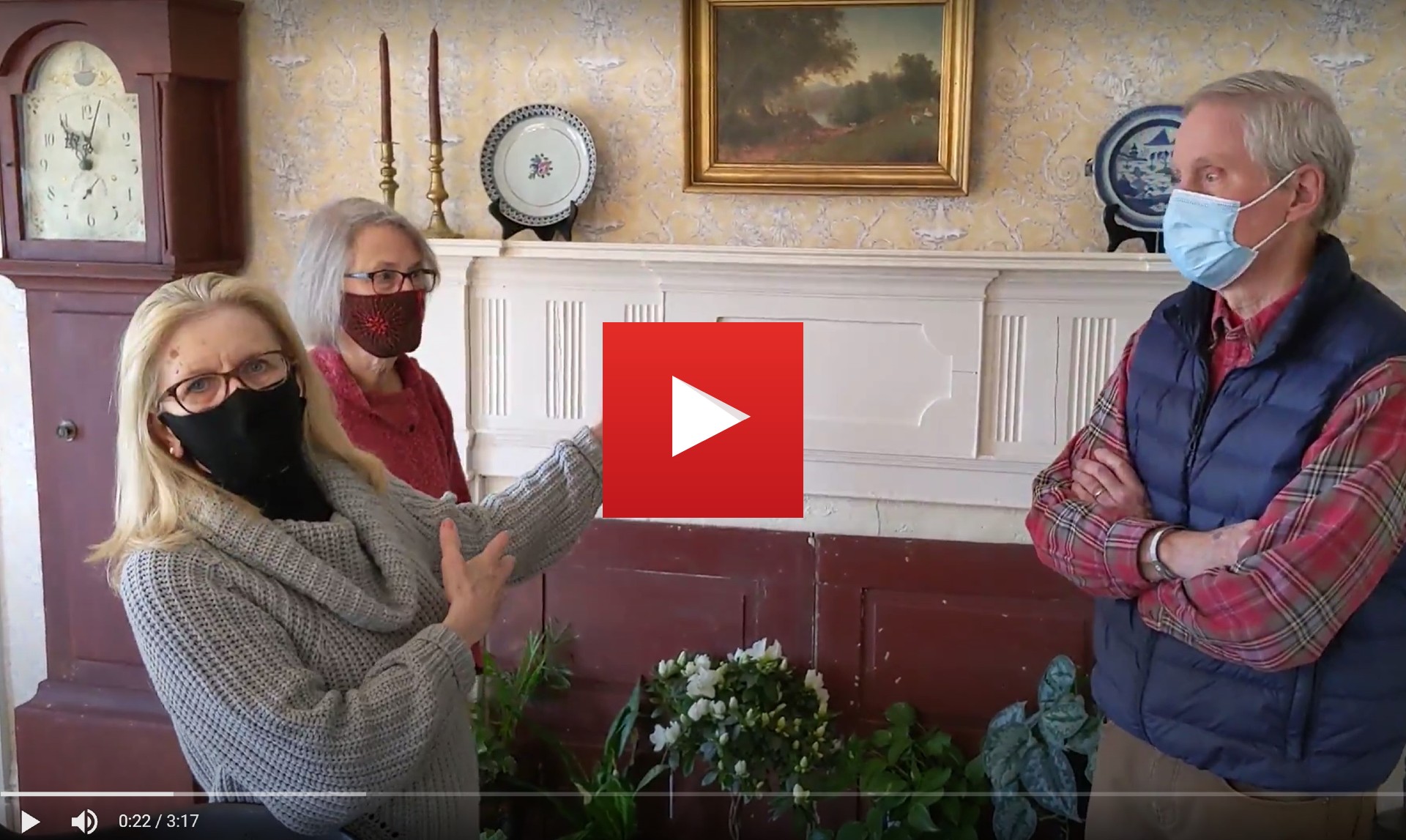 The living room has a built-in corner bookcase. Heavy molding outlines all the doors in the house. Blind screws in the door hinges, used in the 1740 to 1780 era, were not pointed at the ends but had blunt ends making them difficult to screw. 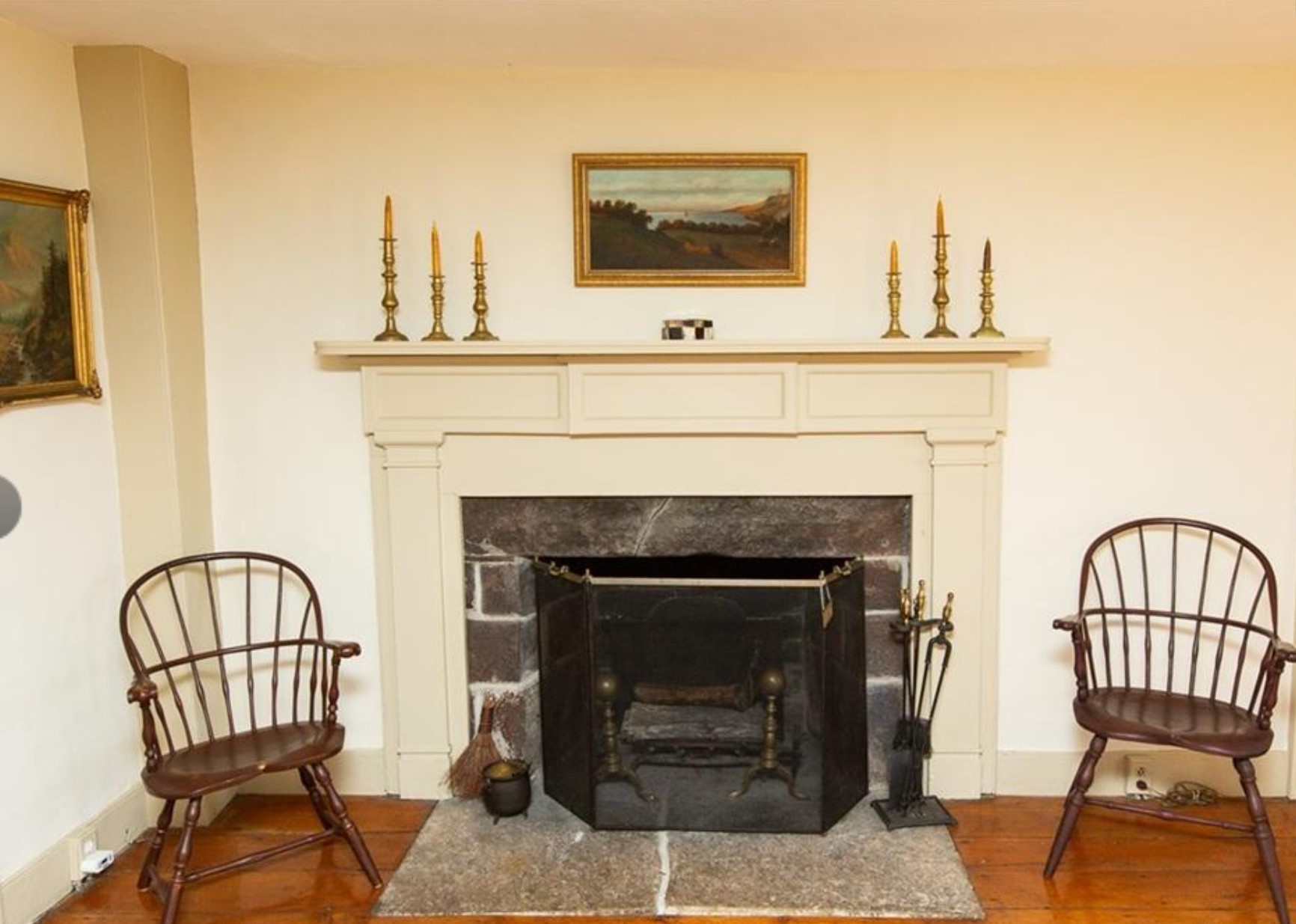 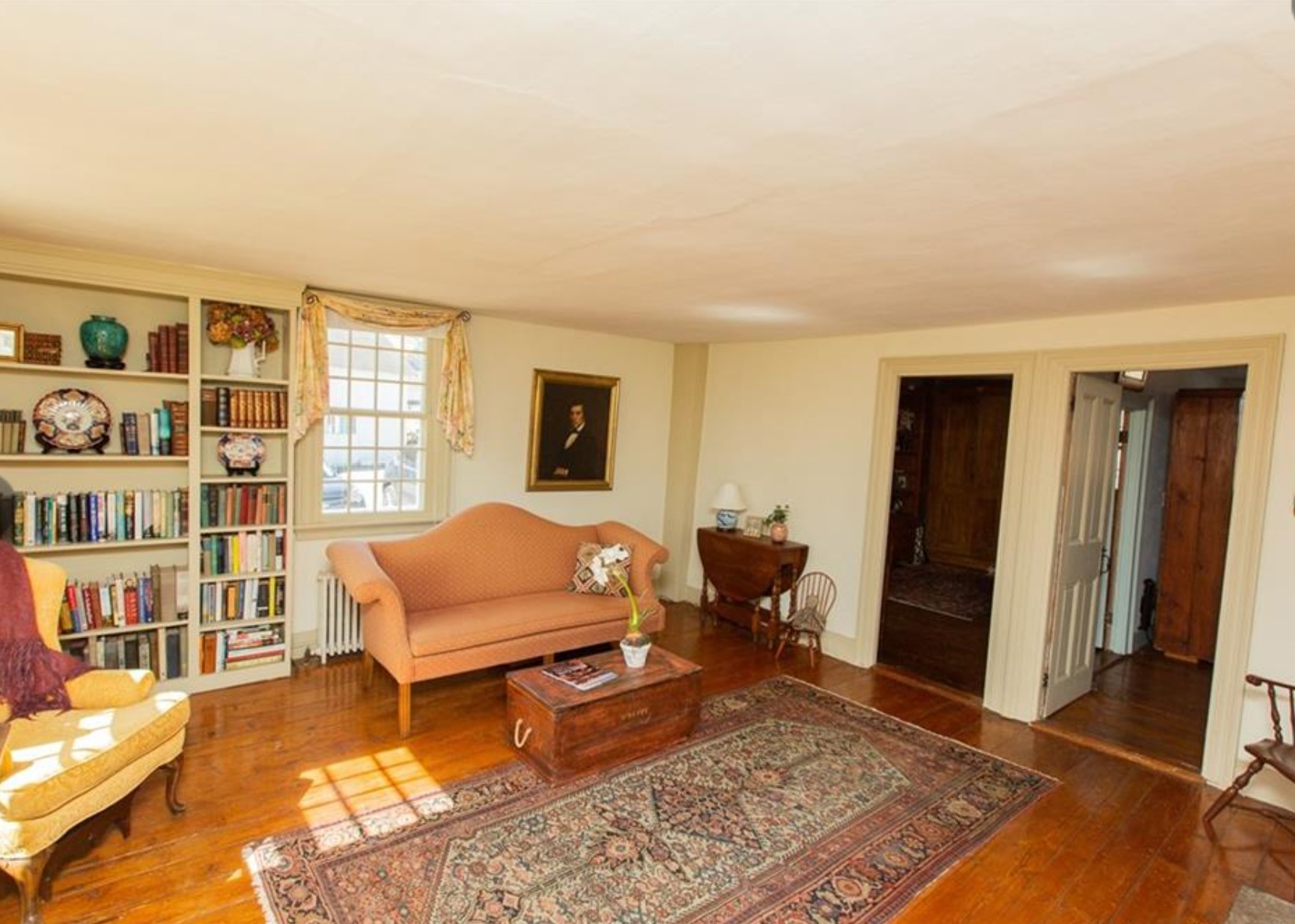 The library has a Victorian shutter which slides to cover or uncover the window. There is also a wardrobe that has been turned into an enclosed bookshelf. It was built by an itinerant worker who traveled throughout the area in the 1840’s building the tall storage cabinets into the walls for wealthy homeowners. 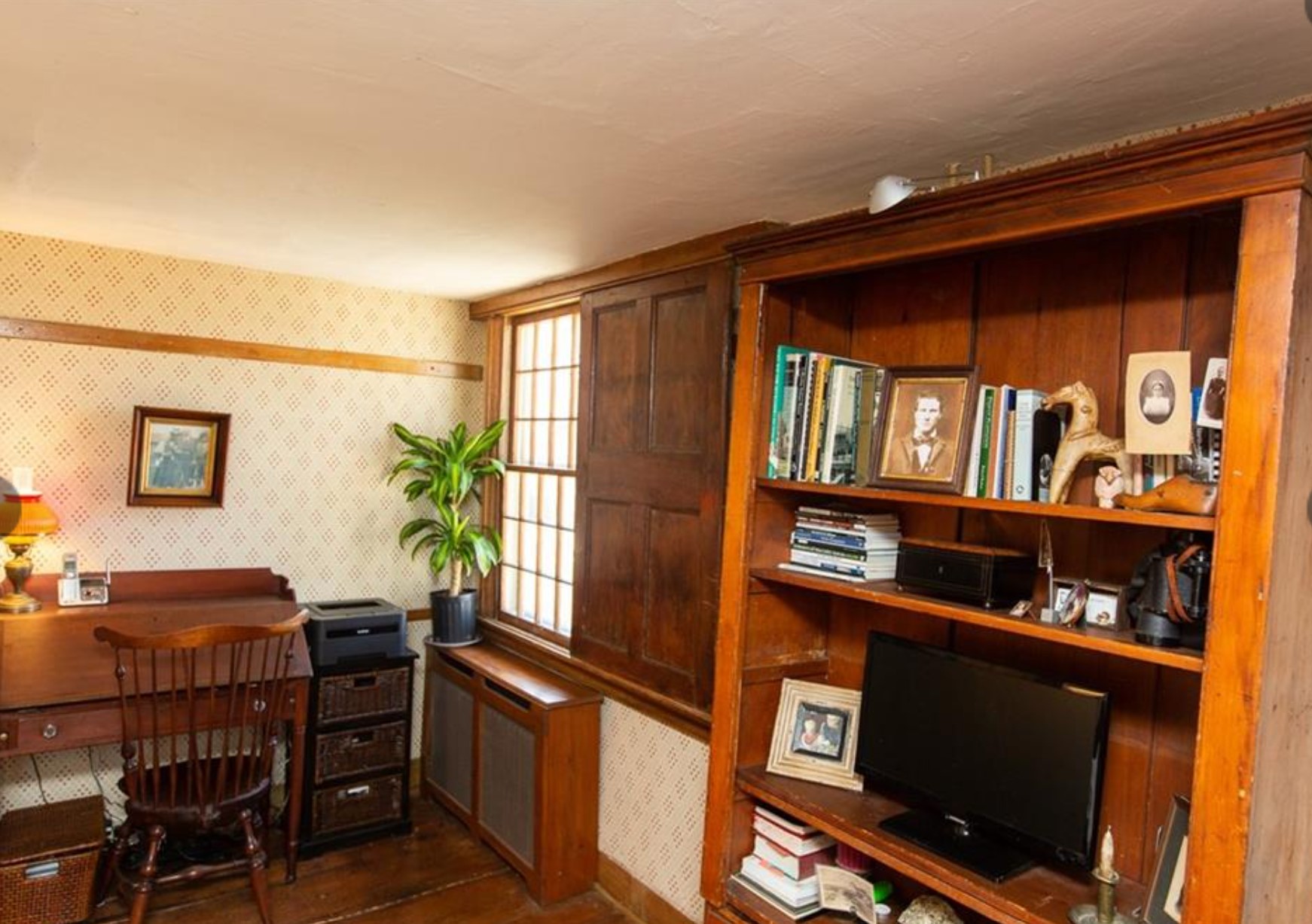 An antique latch from Connecticut Latch is on the door to the Keeping Room where the fire was kept going 24/7 in colonial times. It has a swinging crane holding pots as it was the original kitchen. The front door also has a key and lock from colonial times. 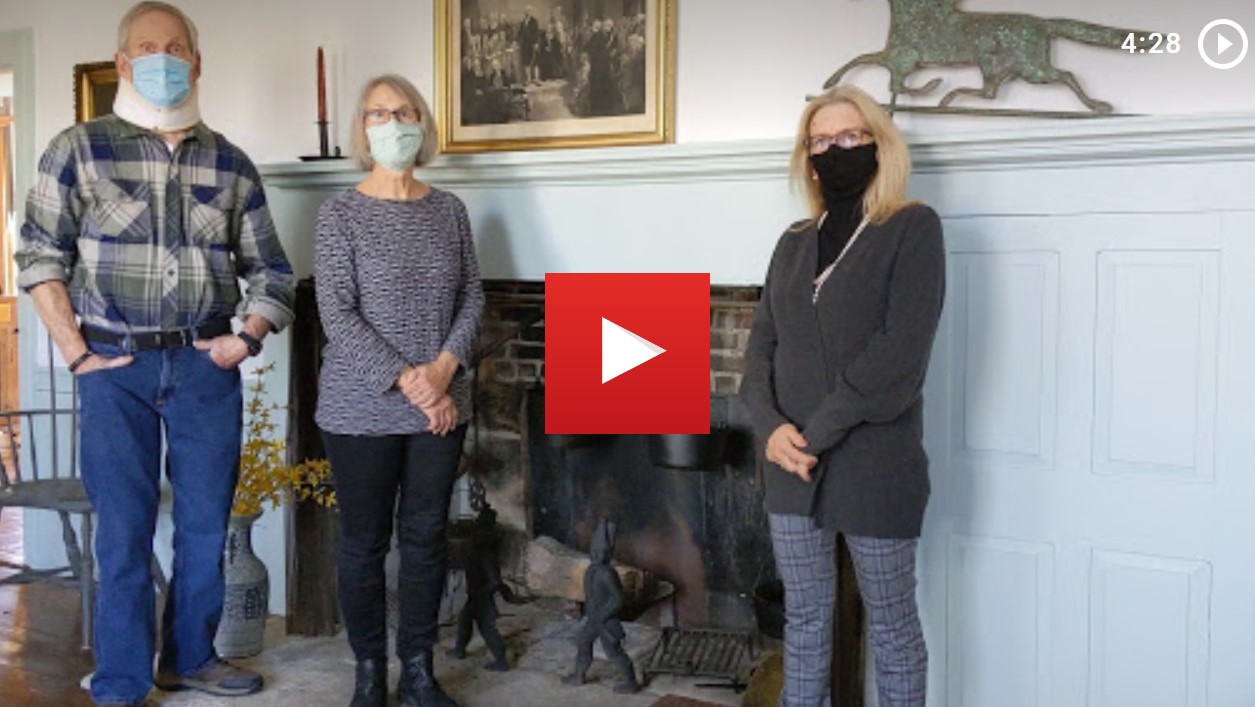 In colonial times the kitchen was the Keeping Room where the fire was kept going 24/7 for heat and cooking. Today you would now call it a family room.  The expansive fireplace has a swinging crane holding pots. It also has a beehive fireplace attached. The corner posts are called Gunstock Posts as they are thicker towards the ceiling to hold the second level. 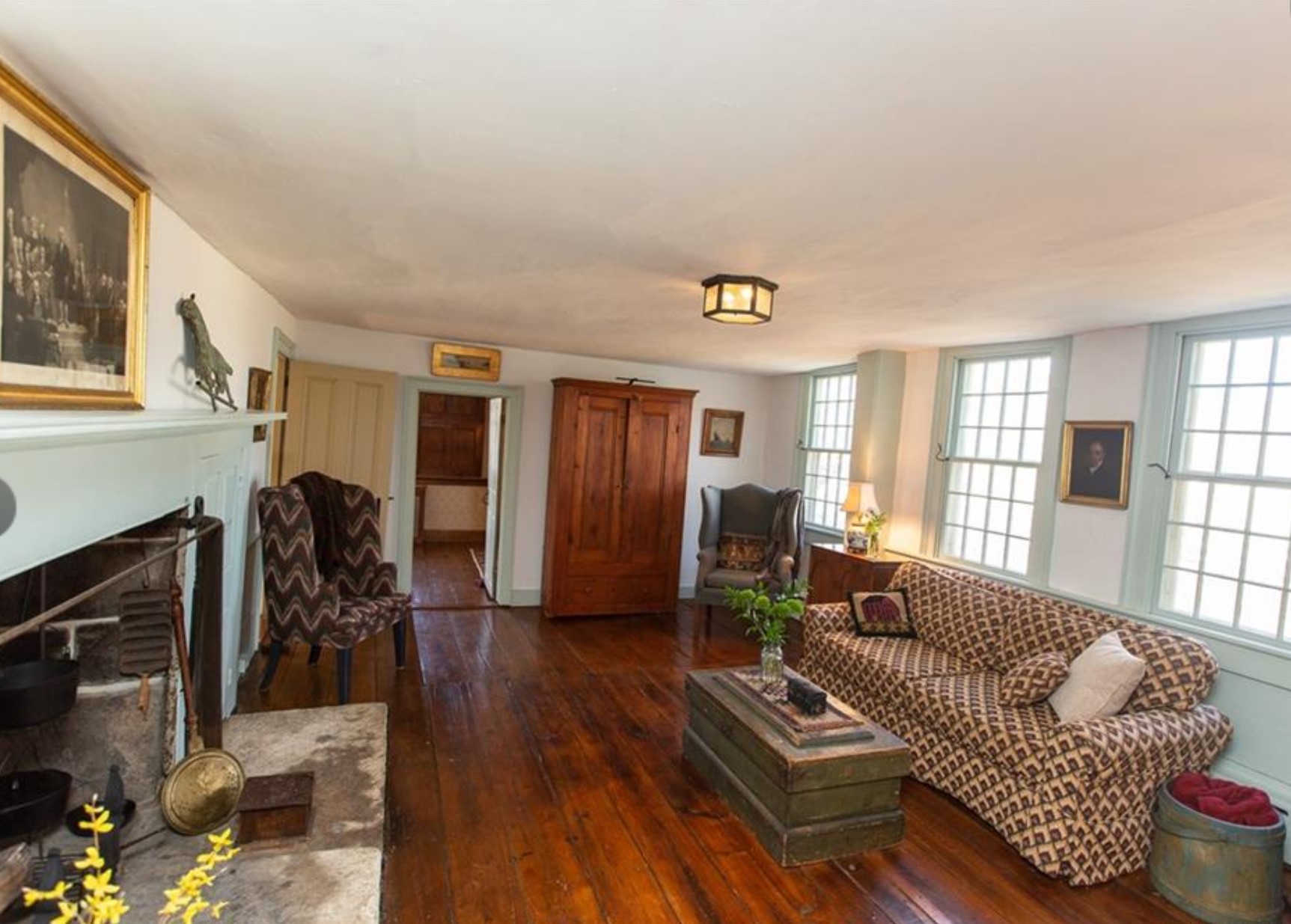 What was typically a pantry is now a bathroom. The outside wall has wide panels running horizontally while the inside walls have wide boards standing vertically, as was the custom of the time. 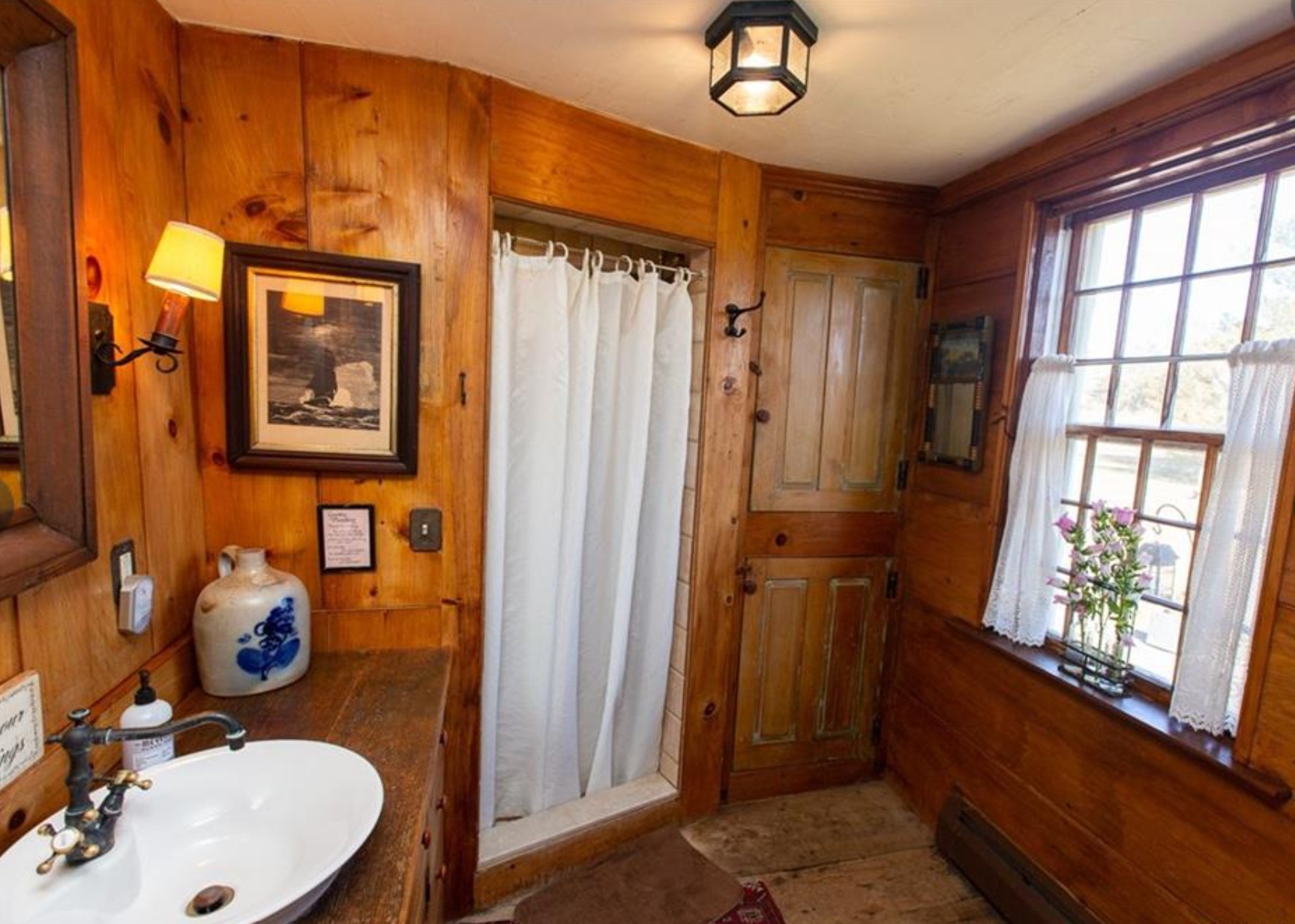 The kitchen was reconfigured in 2008 by Jeff Dana of J Dana Design in Sturbridge, MA. Originally it was a forge that was dragged over and added to the house in 1830. The antique paneling is wallboards from the 18th century. The copper farm sink will immediately get your attention, but you have to open cabinet doors to find many items including the dishwasher. 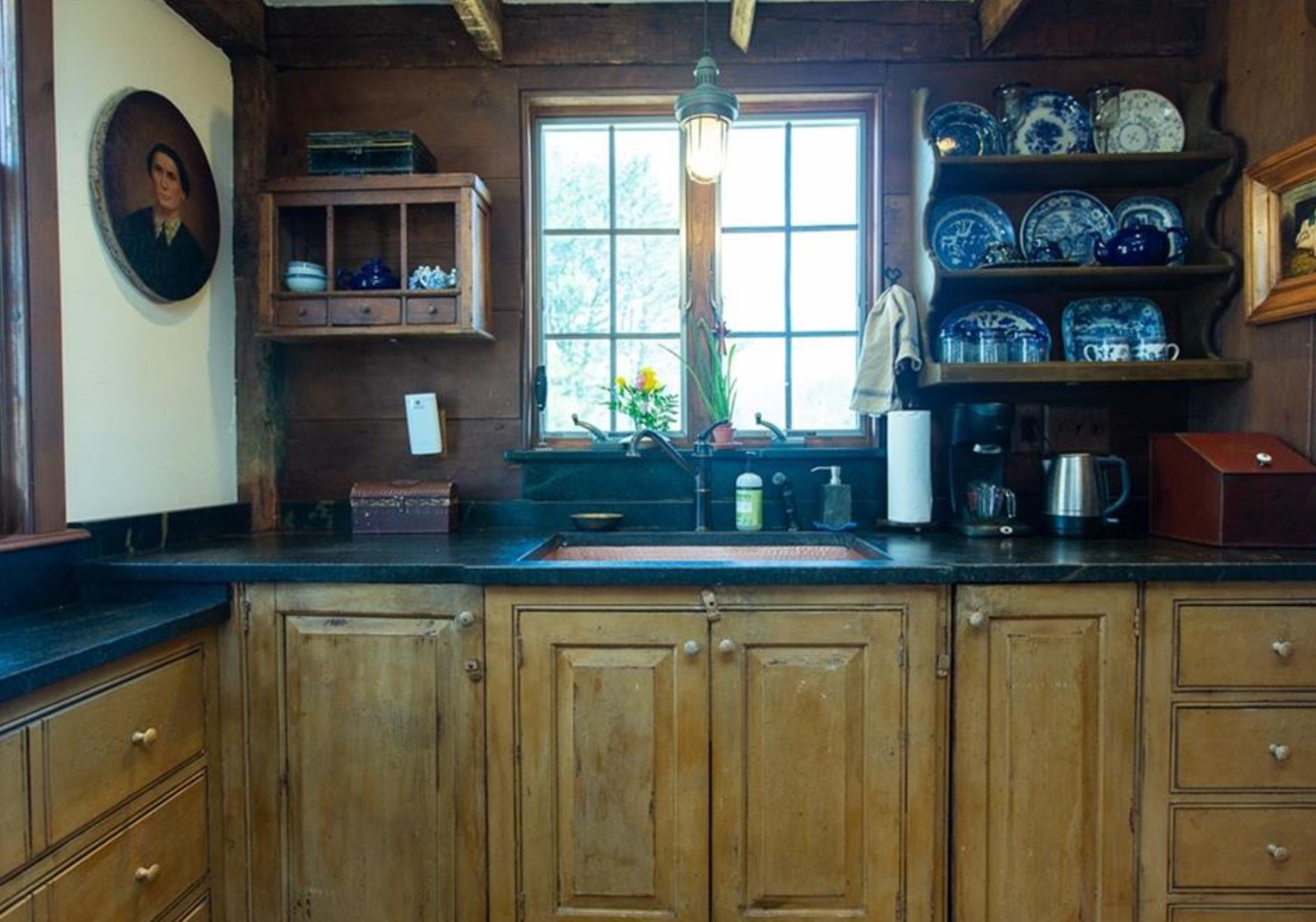 Cabinets are ‘canted,’ sloping like on a ship. The counters are naturally antimicrobial Vermont Ice Soapstone, which is heat-proof and non-porous so it will not stain. The hardwood floor is butternut. 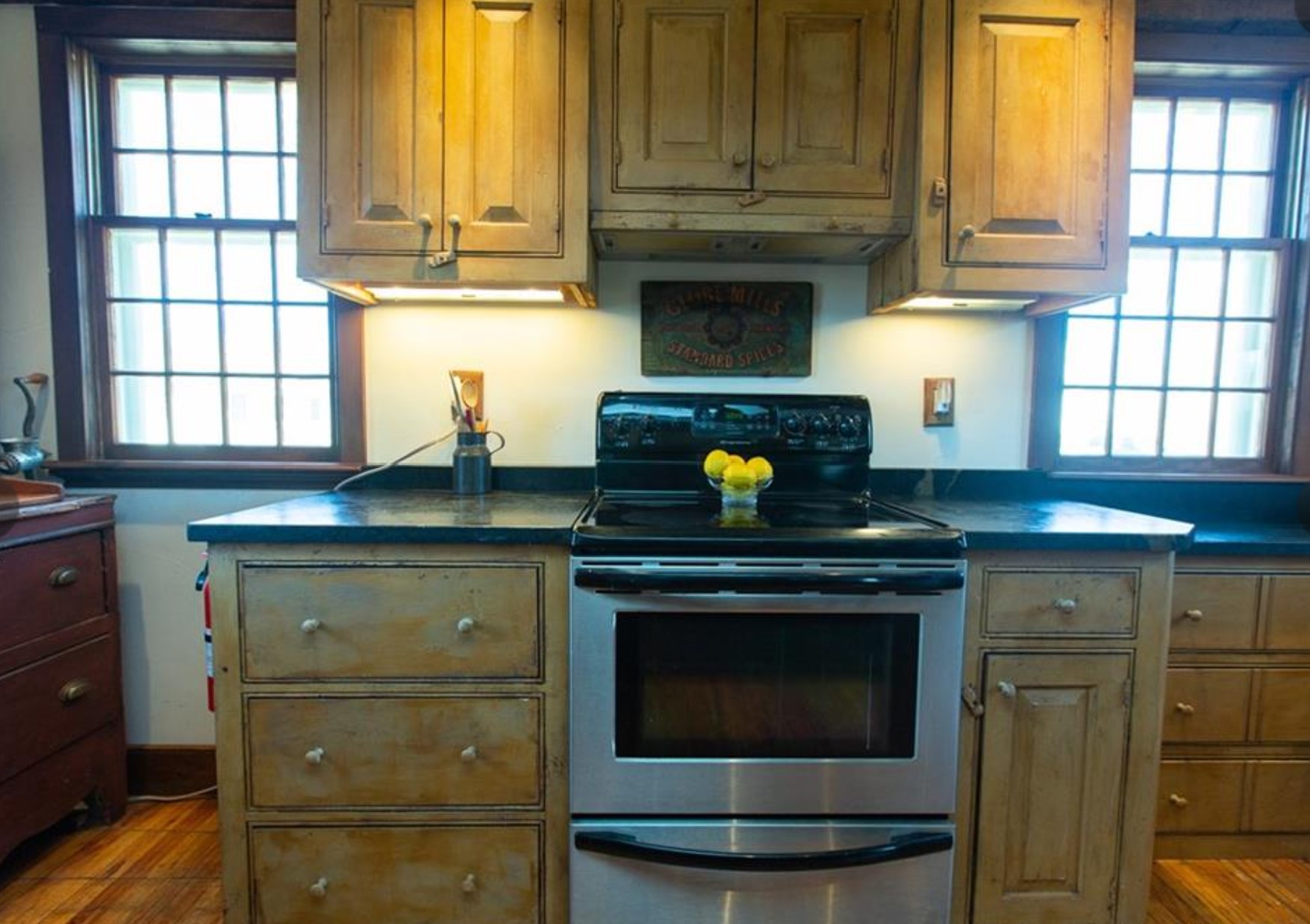 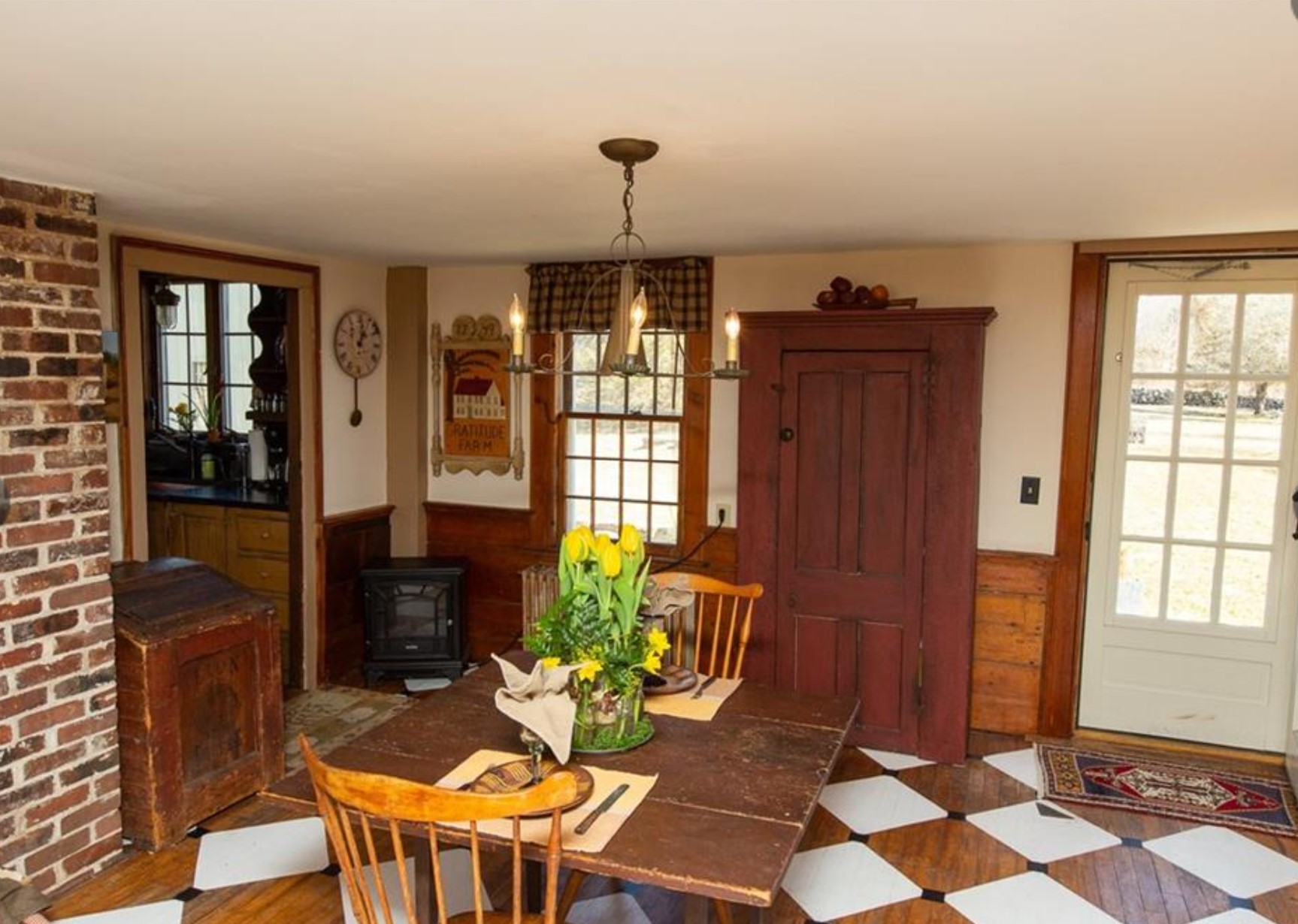 Upstairs you come to two bedrooms, each with a fireplace. Both have a window with southern exposure letting in abundant sunshine. One has a side window that gets greeted with a sunrise while the other lets you see the sun go down. 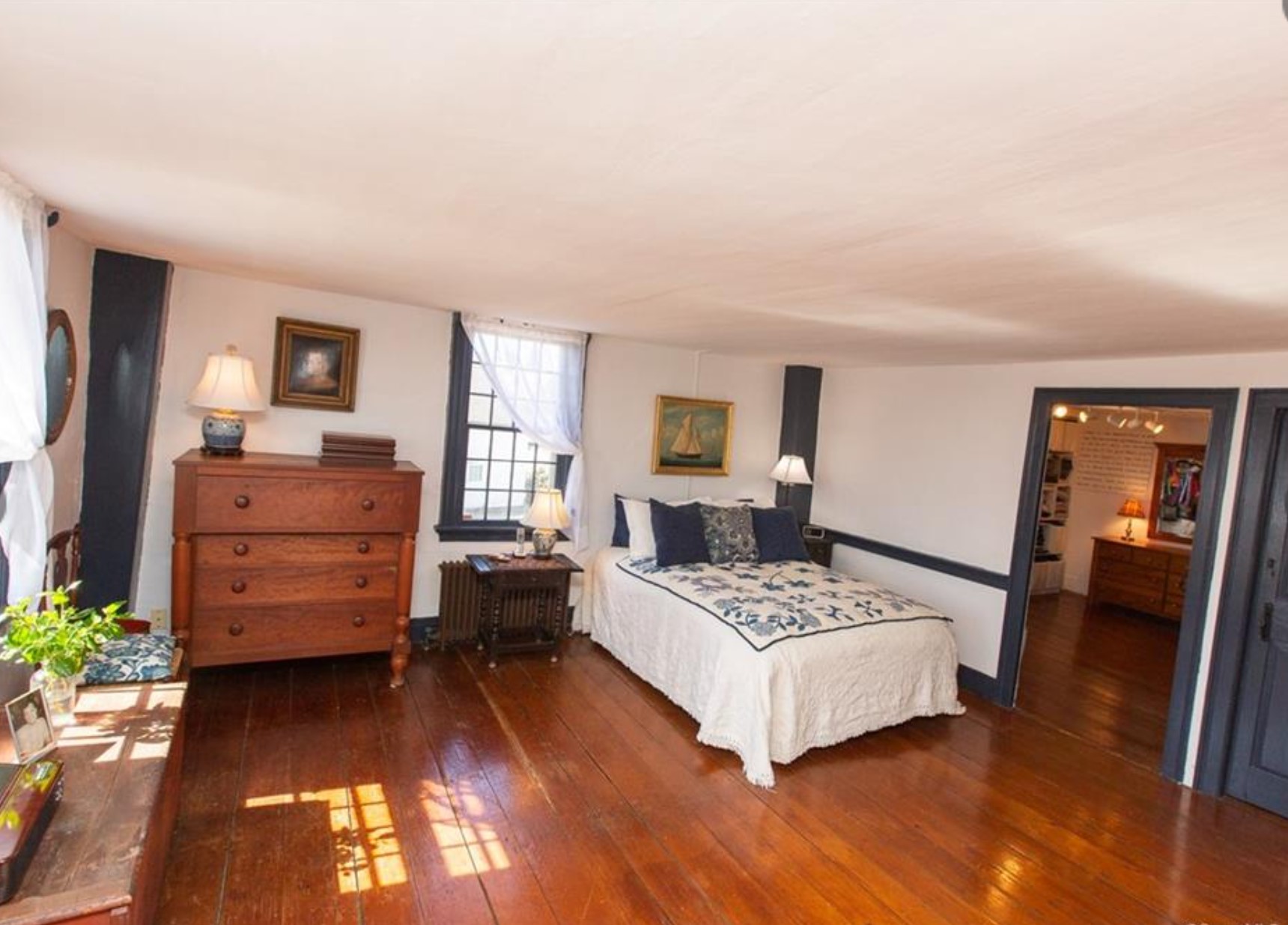 The sundowner has an attached room that has been converted to a walk-in closet but for an estimated $30,000 half of the ‘closet’ can be turned into a nice bathroom. The bedroom also has ‘gunstock posts’ in all corners for support. 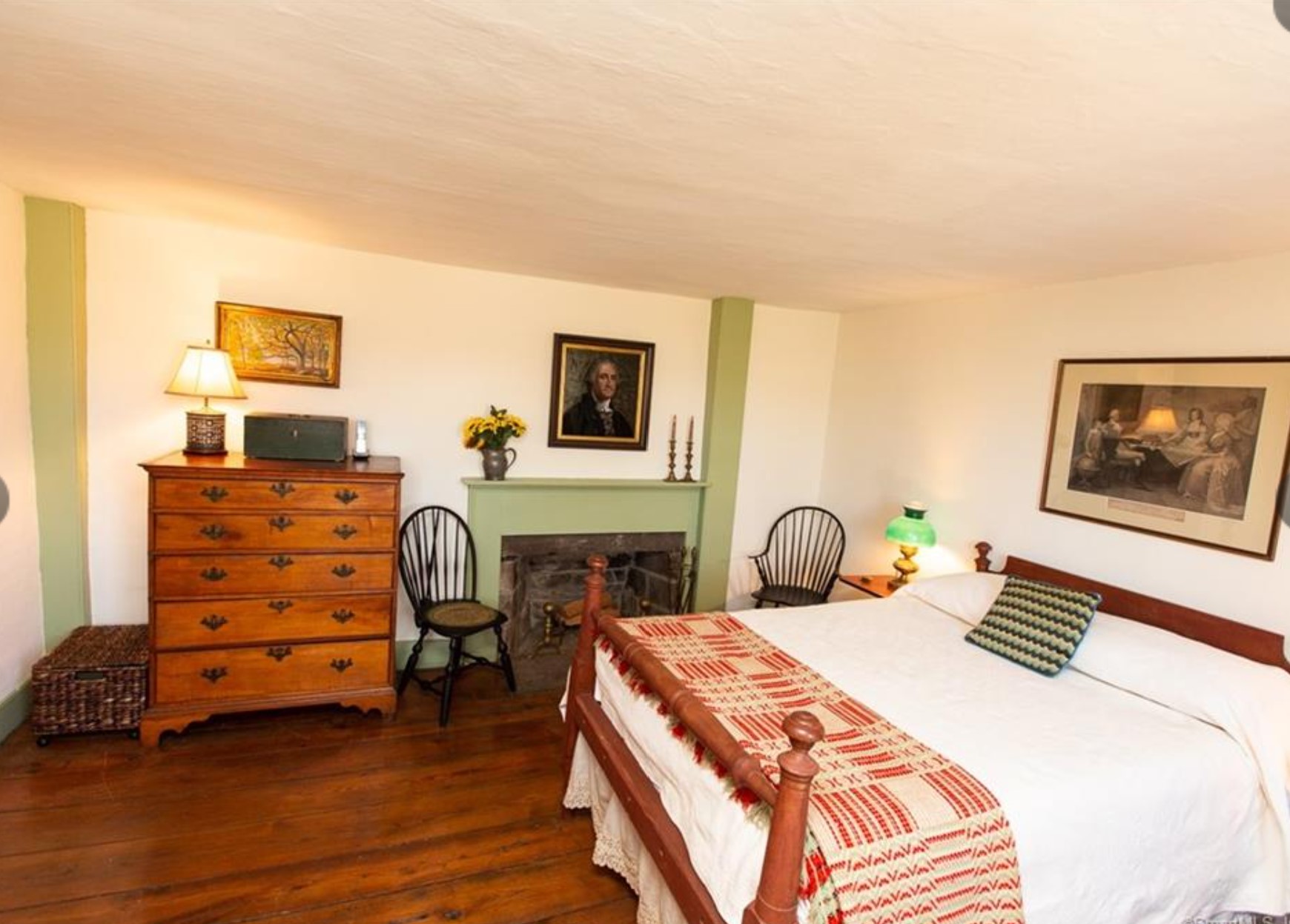 The fireplace has bricks instead of stone for an apron but the sides, or ‘cheeks’, are stone that are near surgically cut for fit. Again, the mantle is hand cut and nicely finished. Built in chair-rail surround two sides of the room. 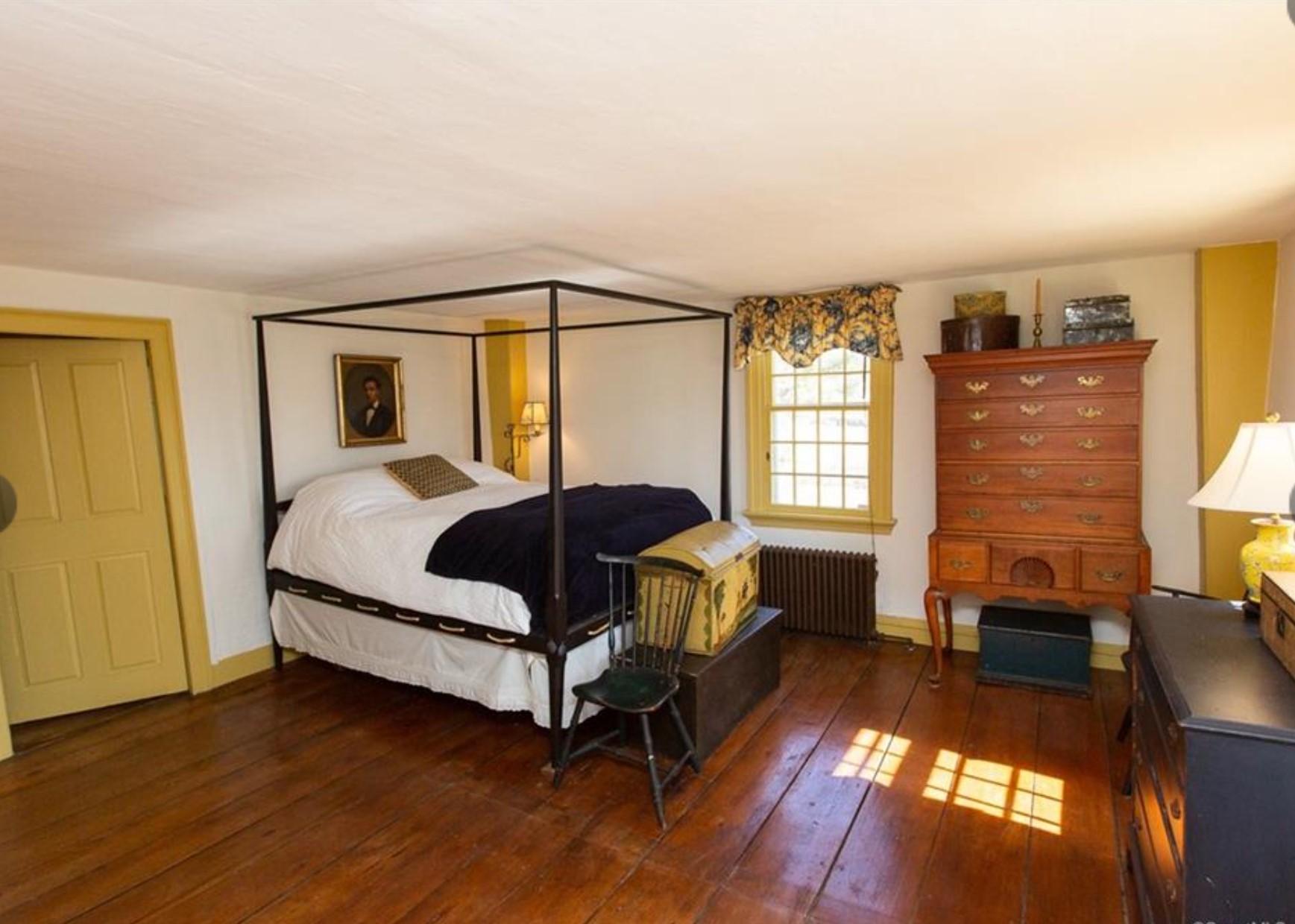 A third bedroom and a Master bedroom are next to the back staircase and full bath. The floors on the second floor are pine as opposed to the chestnut floor in the dining room and the keeping area. 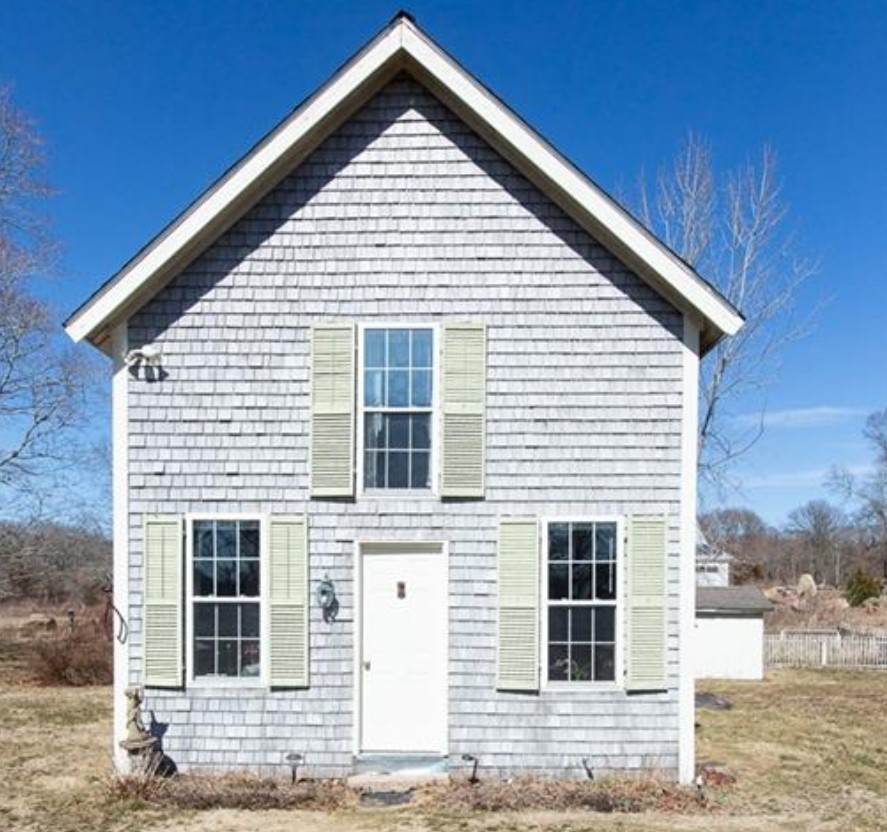 A colonial like this was not complete without a separate icehouse, a two story one at that! 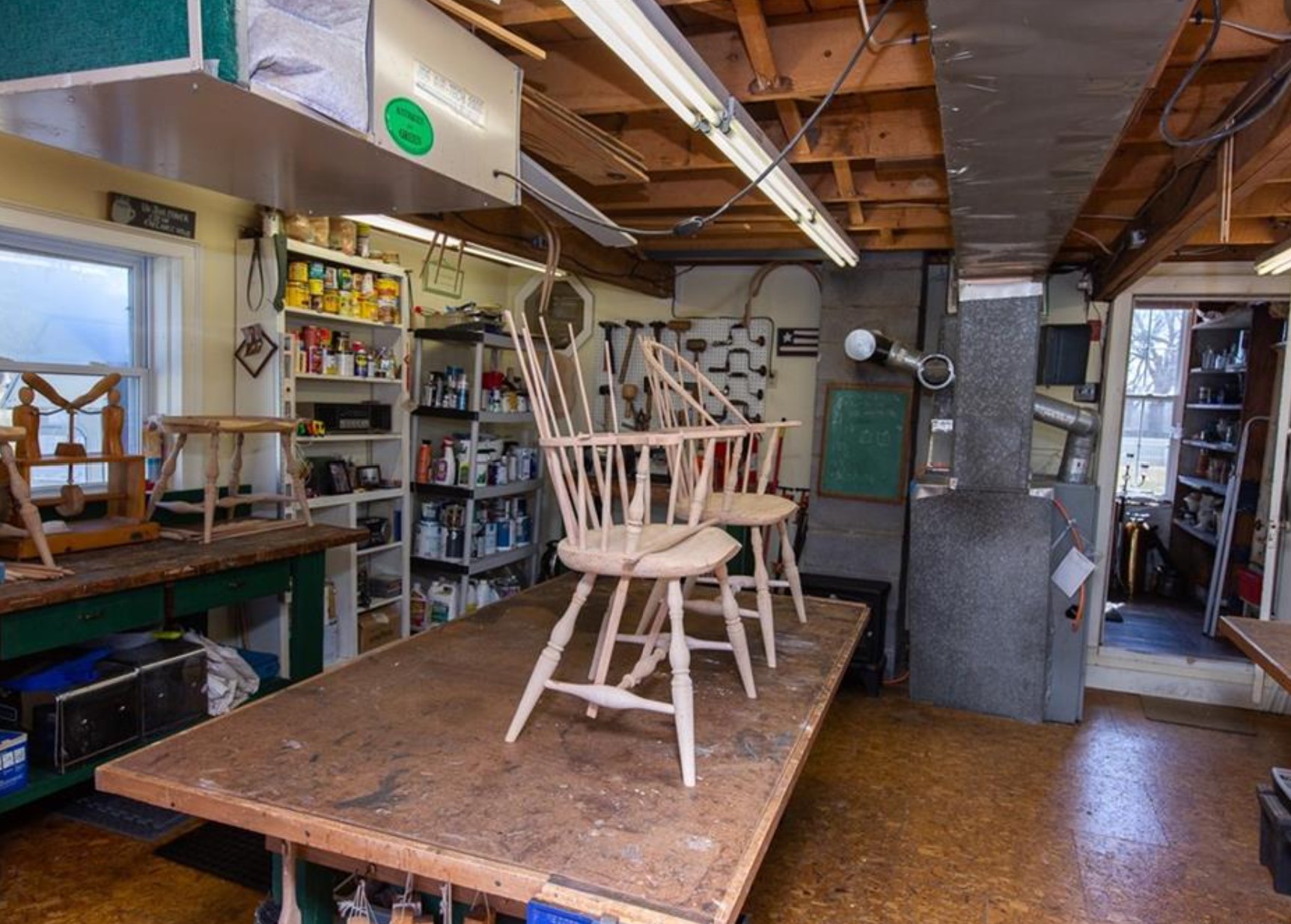 The downstairs is now a woodworking shop that would make any carpenter proud. 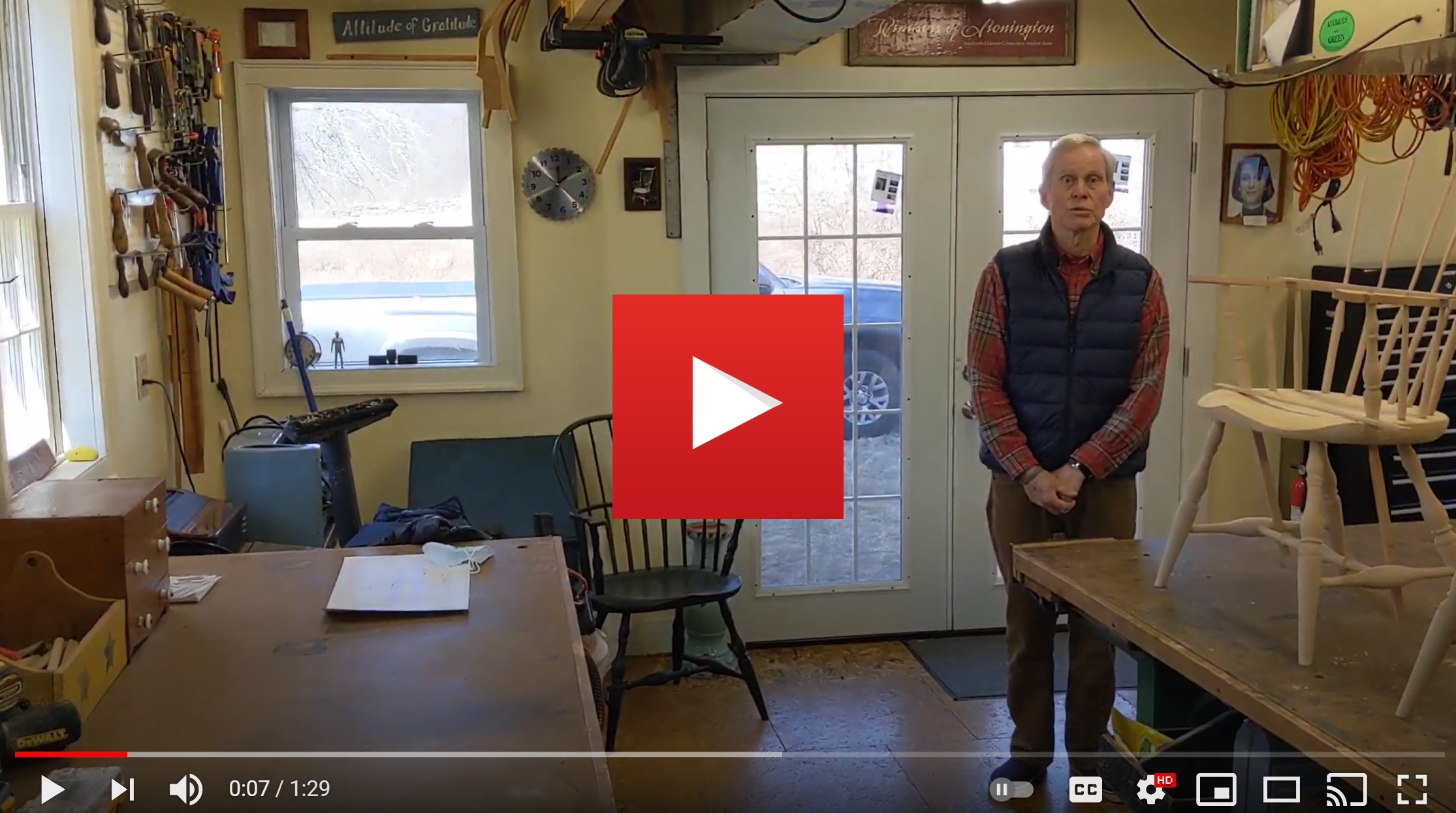 Upstairs has been converted to an art studio and  that has an electric half bath, no plumbing in the building. Any artist would enjoy creating in this environment. 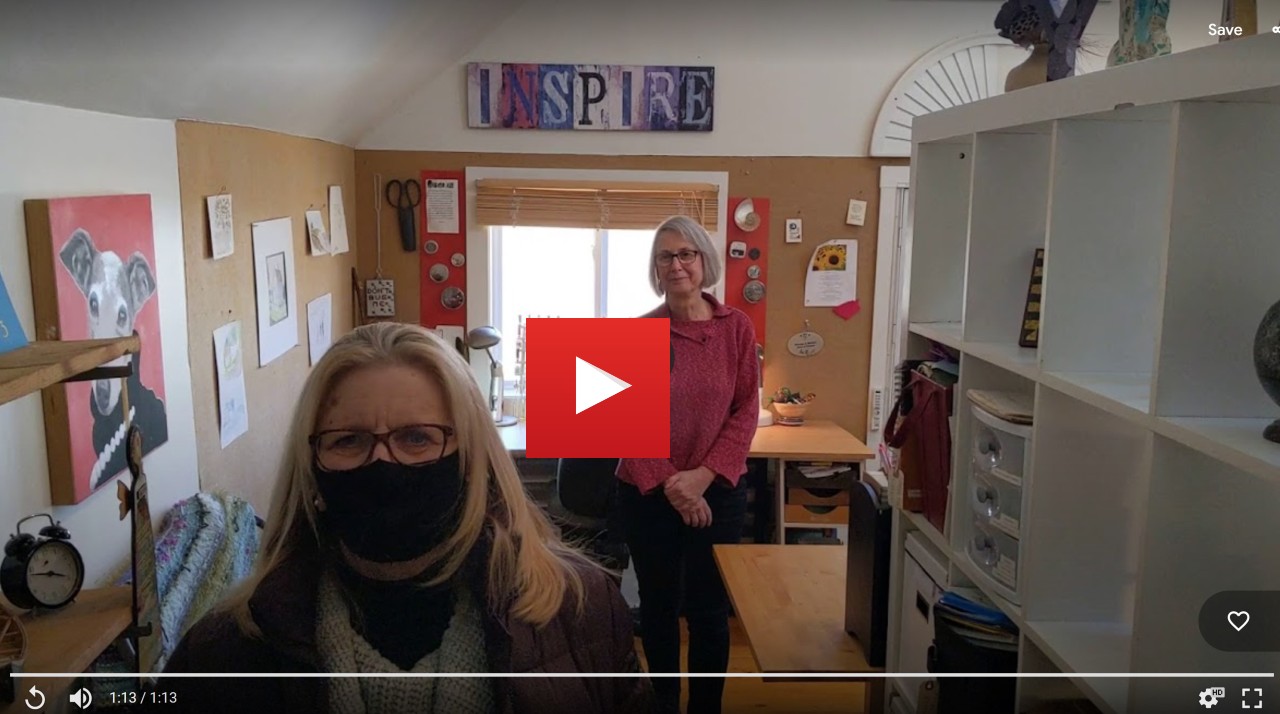 One more outbuilding now is used more for storage but was a place to keep livestock out of the elements. How you use it is up to you! 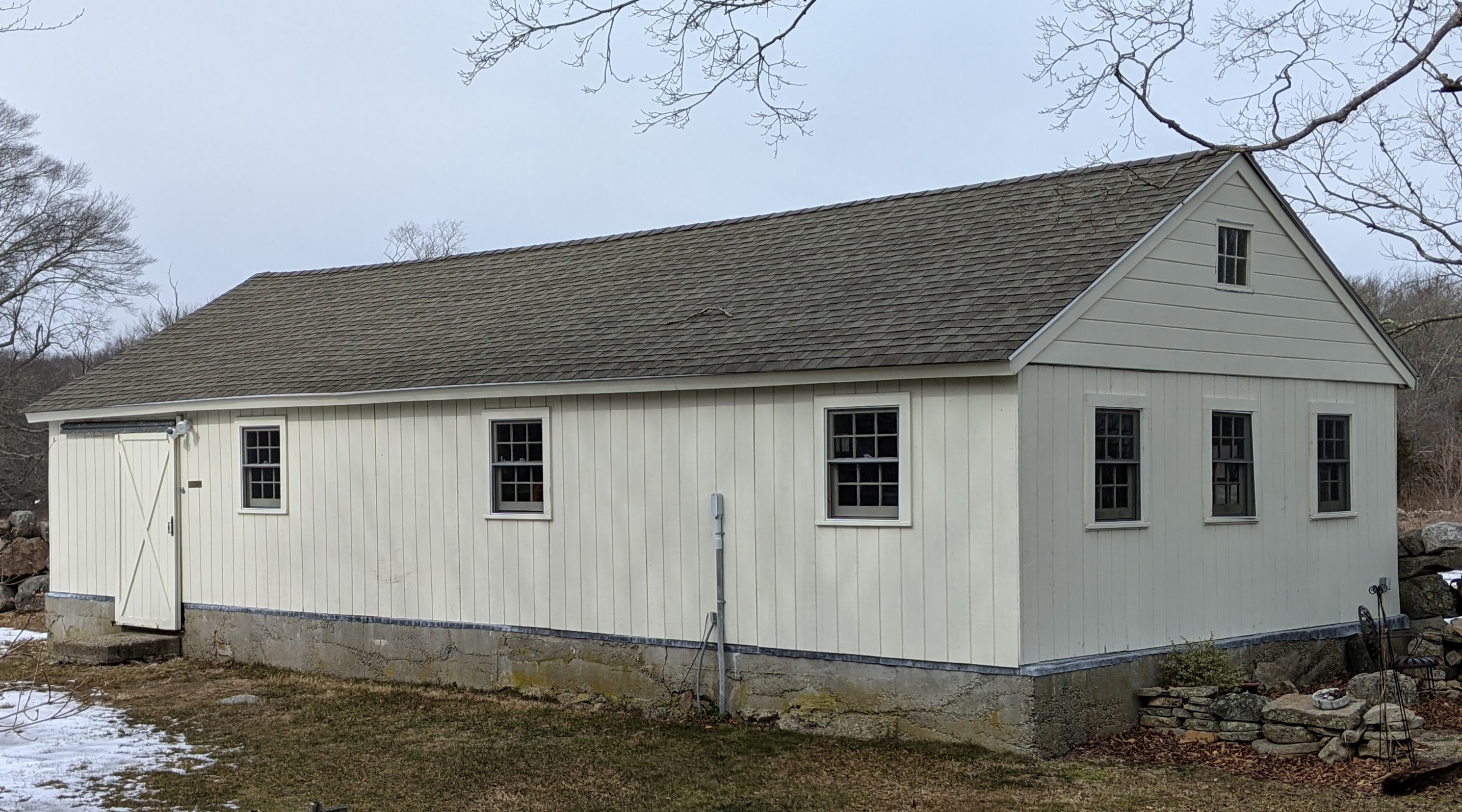 As a home inspector put it, 704 Al Harvey Road in Stonington is an old lady on a new foundation. The basement stone (called ‘rubble’) foundation has been repointed and the floor was dug down four inches for a pouring of concrete. The mechanicals are all in ship shape. 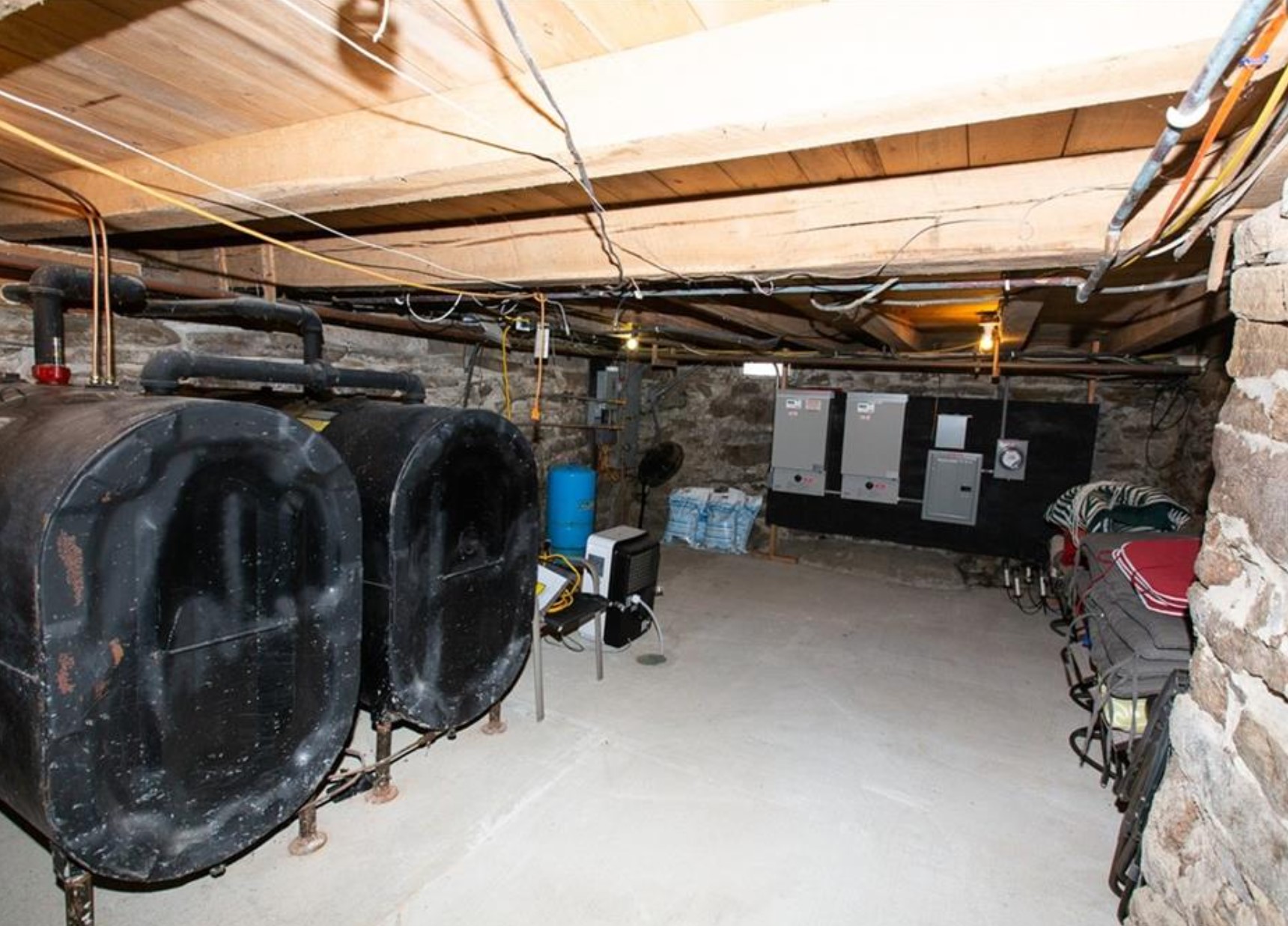 A book, Early Domestic Architecture of Connecticut by J. Frederick Kelly, carefully explains the detail in which homes such as 704 Al Harvey Road in Stonington were constructed. 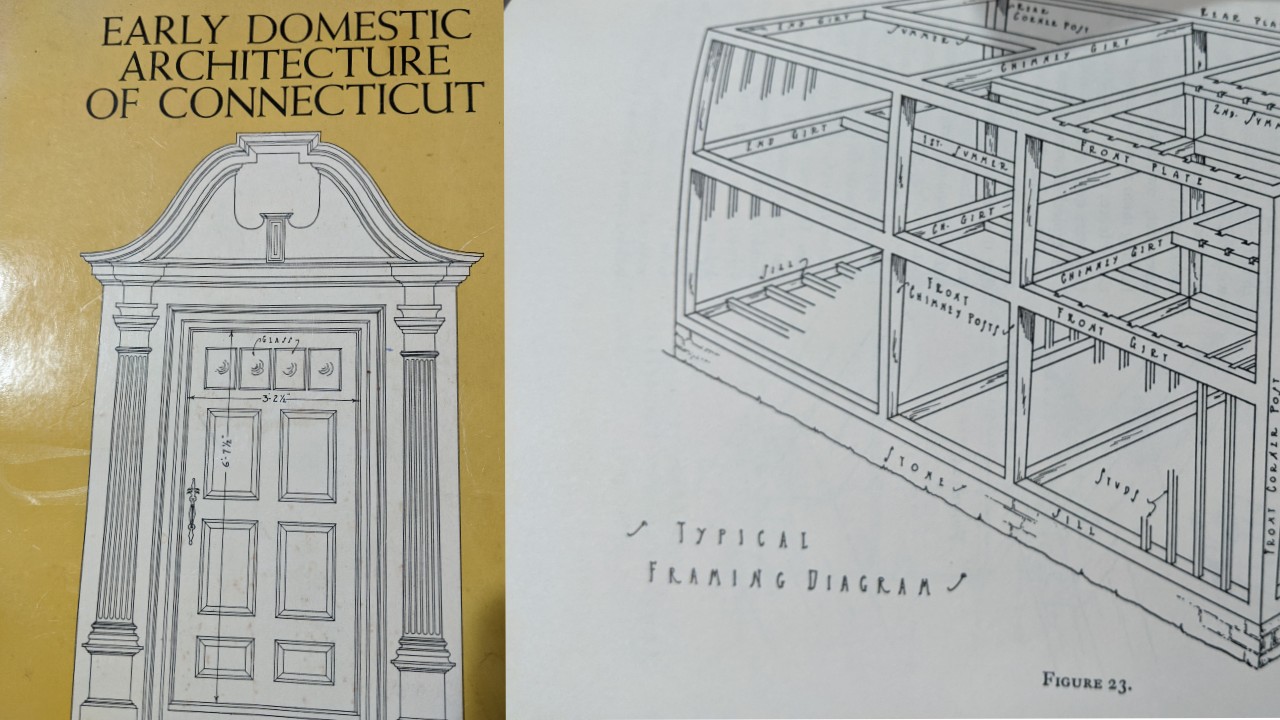 Are you looking for a home that has retained its historical look while being functionally relevant to the 21st century? If you could enjoy a historical home, conveniently located in the countryside but close enough to shopping and commuting then take a look at a home that belonged to pre-Revolutionary War settlers of America. It will take you back in time!